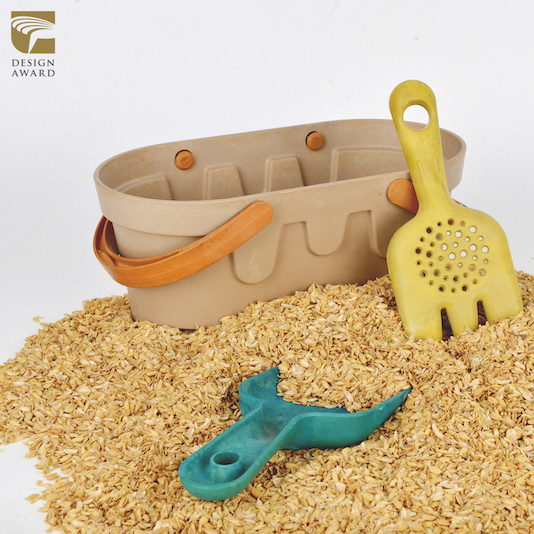 Taipei, TAIWAN — The Golden Pin Design Award and Golden Pin Concept Design Award celebrated this year’s Best Design winners at a lavish award ceremony in Taipei on December 5. A total of 33 Best Design winners were crowned from the two awards, alongside 2 Special Annual Award winners for circular design and social design in the Golden Pin Design Award. Among this year’s award winners, the jury identified a number of winning design trends, which credits the awards’ role in championing the most advanced and innovative designs of the year.

Winning Design Trends
The jury identified a number of design trends among this year’s winners, which credit the awards’ role in championing the most advanced and innovative designs of the year. At the top of their list is the pivotal trend of circular design in response to the global environmental crisis and imminent demand for sustainability. Other trends include the post-demographic transition, custom Chinese typography, animated social commentary, experimental renovation, and cultural curation. 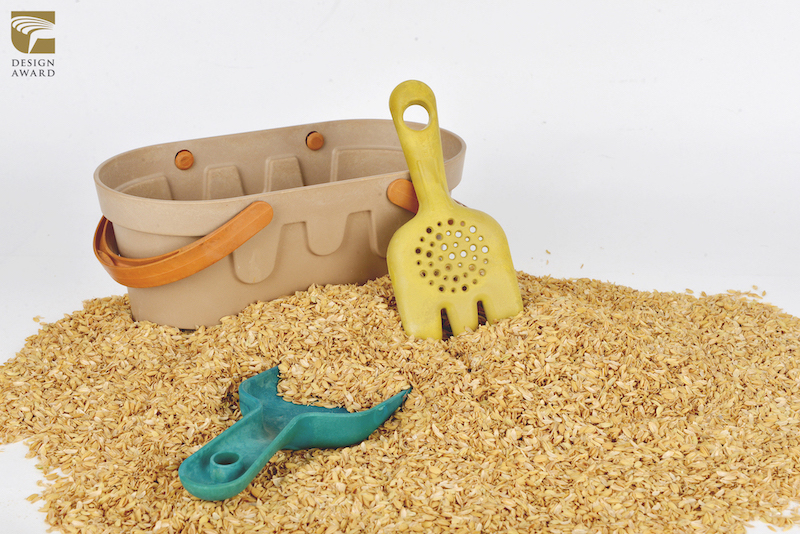 Circular design
As everyone around the globe faces up to the environmental crisis, circular economy has emerged as the leading solution, and designers are adopting the principle as circular design. Materials are one of the most crucial elements in circular design; focusing on sustainability and the three Rs (reduce, reuse, and recycle) as well as biodegradable qualities. In the practice of circular design, designers must consider the full life cycle of products to create a holistic cycle, as opposed to the linear model whereby a products lifecycle ends with waste and refuse.

Other design awards around the globe are likewise championing sustainability, social design, and circular design by nominating exceptional projects for special awards. For example, Germany’s iF Design Award announces the iF SOCIAL IMPACT PRIZE twice annually, championing design projects that address the United Nations’ 17 Sustainable Development Goals. Another world-renowned design award from Germany, Red Dot has recognized products for incorporating sustainable materials such as Kaffeeform Material by Kaffeeform – a coffee cup made from coffee grounds, KUNGSBACKA by IKEA – kitchen furnishings made from recycled wood and PET plastic bottles, and Tresta by Katharina Hölz – biodegradable homeware products made from natural adhesives as well as pomace, which is grape waste from the winemaking industry. 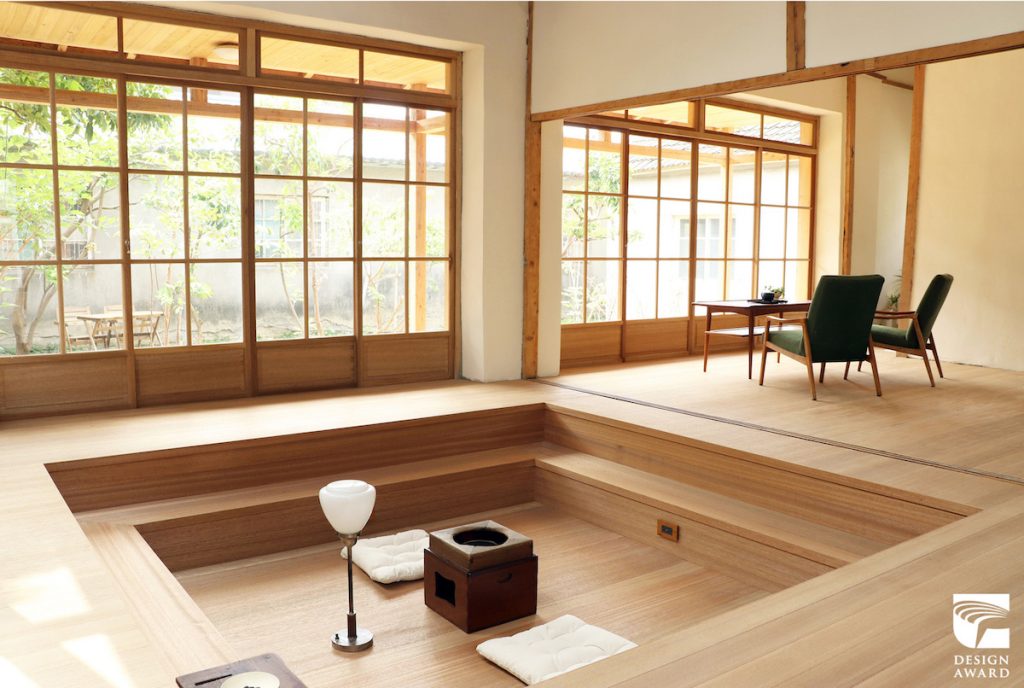 Currently in Taiwan, local institutions are working on programs to revive historical architecture, particularly those from the early twentieth century Japanese colonial era. Many buildings from the era are made out of wood, which means they fall into disrepair much quicker than those built from brick or concrete, and are therefore in desperate need of preservation. Architects focusing on these renovation projects often bring their own contemporary touches to the architecture and interior design, which results in experimental fusions of the old and the new.

Final Selection jury member, Tony Chi (Founder of tonychi) is interested in design that shows self-reflection and a great sense of purpose from the designer, or as he calls it “the silent voice”. He references the trend of design for preservation in the award, praising it in both tangible and intangible forms, relating to heritage and urban renewal.

Golden Pin Design Award 2019 Best Design winner, JCA Living Lab is a century old Japanese dormitory in Taipei, which was renovated by JC Architecture and features the design firm’s signature interior-exterior layers via glass interventions in the architecture. JCA Living Lab was also awarded Interior of the Year at the Netherlands’ INSIDE World Festival of Interiors. Golden Pin Design Award 2019 Design Mark winner, RiRo 26 is another Japanese dormitory built in 1940 and located in Kaohsiung. The renovation project was led by GCA studies and supported by the Kaoshiung City Government Bureau of Cultural Affairs.

Post-demographic transition
Product design is traditionally guided by the demands of the market, but some designers are going against the grain to offer more inclusivity. This post-demographic transition is aided by lower birth and death rates, more equality in pay between men and women, and other factors such as the specific needs of disabled people. Due to the never-ending demand for expansion into new markets, product designers are looking beyond traditional demographics and discovering new possibilities along the way.

Golden Pin Design Award 2019 Final Selection jury member Apex Pang-Soong Lin (President of Taiwan Design Alliance) expresses his concern that product design has become completely market-oriented, catering only to the needs of the larger demographics. However, as a returning Golden Pin Design Award jury member, he found this year’s award featured a number of products designed for smaller demographics, which is very encouraging.

Golden Pin Concept Design Award 2019 Final Selection jury member, Wei-Hsiung Chan (Founder of Business Next Magazine) was blown away by the animation concepts from designers in China, which explore social issues such as domestic violence and alienation in urban contexts. He comments that, aside from the designers’ mature creative skills, the animations themselves also offer deep and emotional insights into Chinese society. 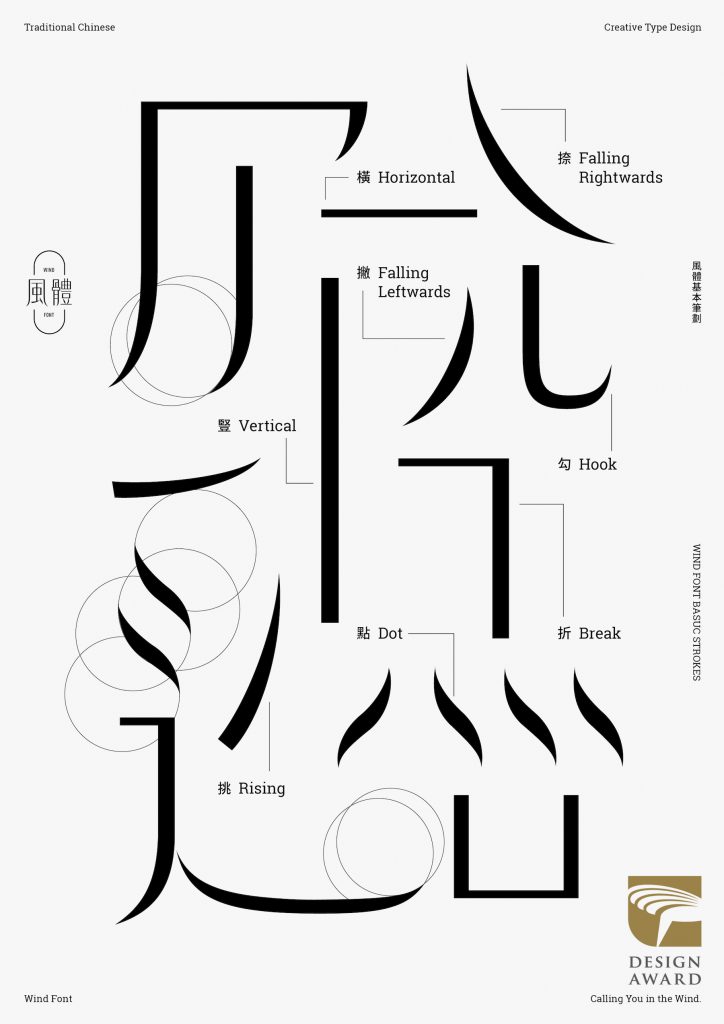 Custom Chinese typography
Designing a Chinese typeface is a long and painstaking challenge, which can take years to complete due to the sheer number of glyphs in the language. As opposed to latin fonts that usually contain around 26 uppercase and 26 lowercase glyphs, plus special characters and symbols, a Chinese font could contain upwards of 8,000 individual glyphs. This makes the task of designing a custom Chinese typeface especially time consuming, however, there are still designers specializing in Chinese typography and those who are willing to invest in their production.

Secondary Selection jury member, Escher Tsai (Creative Director of Dimension Plus) has noticed the growing interest in Chinese typographic design and sees this trend reflected in the Golden Pin Design Award. He adds that the award judges are likely to be wowed by any new Chinese typeface because they are few and far between, and especially when the font has been customized or localized for a specific application. By customization he refers to fonts that are designed for brands and by localization he means fonts that are based on a specific place or time period. 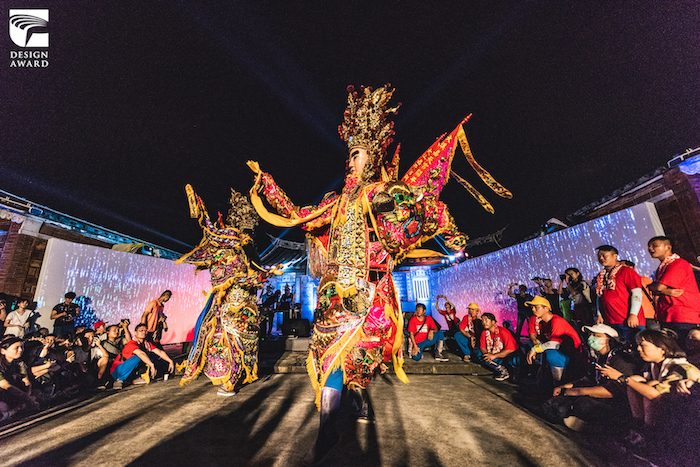 Cultural curation
The integration design category was introduced for the first time in the Golden Pin Design Award just last year. It responds to the designer’s role in integrating multiple practices, from spatial design and architecture to communication design and multimedia, all in one project. Public, cultural events are becoming a mainstay for a number of designers who specialize in curation.

Final Selection jury member, Shu-Chang Kung (President of the Chinese Society of Interior Designers) highlights the trend of designers integrating culture and industry through curation and public events. He gives a number of examples from among this year’s award winners, including 2019 TAIWAN LANTERN FESTIVAL IN PINGTUNG, LIGHT-DRIVING, DaxiDaxi, and Stage On the Move.

Geographical Stats
Entrants in this year’s Golden Pin Design Award came from 23 countries and regions, which is two more than in the previous year. Entries from Taiwan and China made up the majority, 39 percent (1,192) from Taiwan and 47 percent (1,465) from China, followed by 10 percent (298) from Hong Kong and Macau, then 2 percent (72) from Singapore and Malaysia. The remaining 2 percent of entries came from various countries and regions in Asia, Europe, America, and the Middle East.

The Golden Pin Concept Design Award received entries from designers in 24 countries and regions, which is one more than in the previous year. Entries from Taiwan made up 31 percent (1,525) while entries from China nearly doubled the previous year’s figures, comprising a massive 66 percent (3,198) of the total entries. The remaining 3 percent of entries came from various countries and regions in Asia, Europe, America, the Middle East, and Africa.

Category Stats
The Golden Pin Design Award is comprised of four categories – product design, communication design, spatial design, and integration design. Product design contains the bulk of entries with 45 percent (1,383) of the total this year, while spatial design remains close to par with the previous year’s entry figures, totaling 20 percent (635) of the entries. The second largest category this year is communication design with 31 percent (957) marking a significant increase from the previous year, and another incline came for integration design, which was only introduced as an award category last year, accruing 4 percent (116) of the entries.

New to this year, the Golden Pin Concept Design Award introduced the communication design and integration design categories alongside the established product design and spatial design categories. Product design is still the largest category with 56 percent (2,691) of all entries, which increased from the previous year, while spatial design makes up 7 percent (351). Communication design is the second largest category with 34 percent (1,656) and finally integration design makes up the remaining 3 percent (148).

The annual Golden Pin Design Award is the longest-running international design award that celebrates products or projects expressly created for Chinese-speaking communities, offering entrants an unprecedented opportunity to prove their prowess in the world’s largest market.

For the latest news on the Golden Pin Design Award, visit:

For the latest news on the Golden Pin Concept Design Award, visit: